In some families, elders tell their grandchildren fairy tales or share children’s classics, but Nancy Econome and her little sister grew up on stories about the restaurant business.

During the first half of the 20th century, various members of her Greek immigrant family ran restaurants in Santa Rosa, Vallejo and Napa, all called The Classic Grill.

“My grandparents didn’t know how to read us stories in English, so they shared their reminiscences,” the Santa Rosa writer recalled of her childhood in Sacramento. 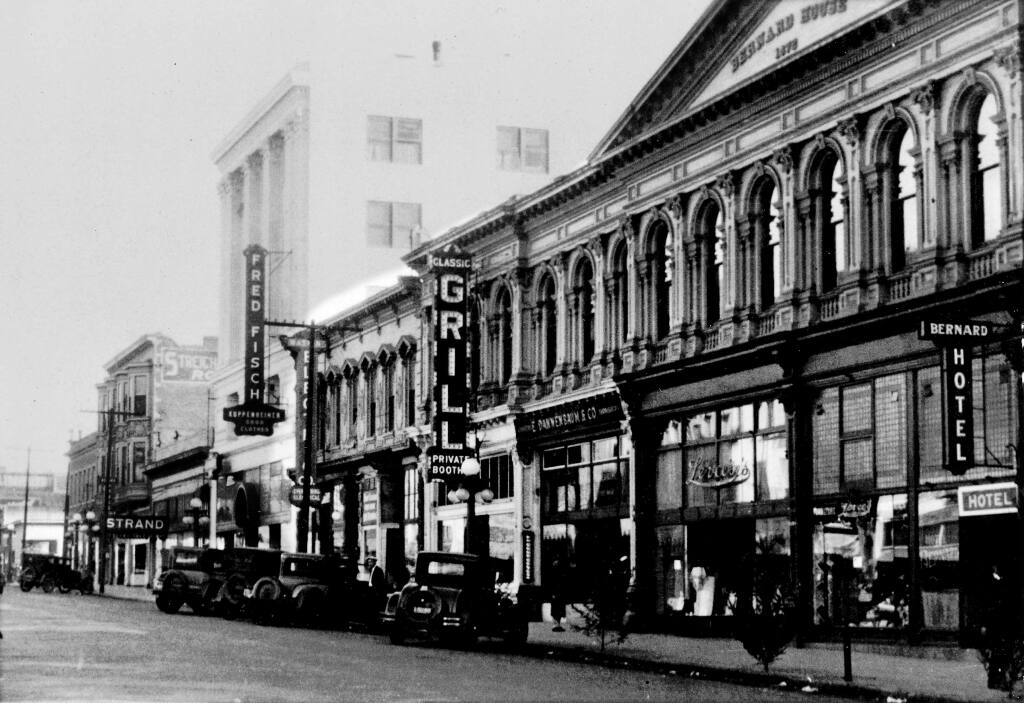 While her grandfather ran the Classic Grill in Vallejo, her great-uncle operated the downtown Santa Rosa version, which stood on Fourth Street, near where the Santa Rosa Plaza shopping center is now. She set her debut novel “The Classic Grill” in Vallejo during World War II but drew details from both locations.

Econome grew up working not in a restaurant, but at her father’s pharmacy in Sacramento, so she supplemented her grandparents’ stories with historical research and interviews with surviving family members.

And she remembered tales of the family restaurant business from her father, the late Ted Econome.

The novel follows the fictional story of a tough Greek cafe owner and his two sons. Demosthenes (known as “Demo”), the older brother, has no interest in the family business, to his father’s disappointment.

“Any Greek business is a family effort,” Econome said, “and behind any Greek family, there’s a restaurant.”

George, the younger brother, is an obedient kitchen drudge and the narrator of the tale. When readers meet George in the first chapter, he’s an old-timer unhappily lunching in a present-day fast food restaurant, entertaining his fellow customers with tales of how it used to be.

In the book, set during World War II, the Classic Grill is a busy, noisy hometown hangout frequented by workers from Mare Island Naval Shipyard and of course, the local Greek immigrant community. That includes Uncle Theo, a drifter and gambler, and his sidekick Taki, with “a body perfectly suited for picking olives and herding sheep.”

The menu features “juicy Salisbury steak with brown gravy” for $1.25, and the kitchen is a madhouse where Demo acts out scenes from “Antigone” and the dishwasher, Mr. Chris, plays the violin.

Creating a believable atmosphere for a time before her own birth and a place that no longer exists proved a challenge for the 65-year-old novelist.

“I interviewed Henry Kaku of Petaluma, who often lectures to schools, museums and libraries about the internment camps Japanese-Americans were forced into during WWII,” she added. “As one of my characters in this novel is Japanese, Henry provided me with great insight and confirmed my facts as well.”

The Japanese character is Tetsuya, “the only non-Greek in the kitchen … in charge of steaming, sauteing and boiling all vegetables.”

“The Classic Grill” is Econome’s first novel, but as she explained, “I had a career in words and pictures,” as brand manager for Jackson Family Wines in Santa Rosa from 1985 until her retirement in 2014.

“I started writing the first draft in 2016. I spent most of 2019 polishing and editing it and getting published.” she said.

The book came out in paperback from Kafeneon Productions earlier this year. It is available at Amazon.com and can be ordered through Barnes & Noble. It recently received an honorable mention from the Maurice Prize in Fiction, sponsored by the College of Letters and Sciences at UC Davis and New York Times best-selling author John Lescroart.

Econome’s great uncle, William Econome, ran Santa Rosa’s Classic Grill from the late 1920s until mid-1950s. Its address was 436 Fourth St. in the downtown district. During its lifetime, the restaurant moved two doors down, on the same side of Fourth Street.

“Someone in the Santa Rosa community started a boycott against The Classic Grill restaurant because it was owned by ’immigrants,’” Econome said.

“The owner, my great-uncle, was actually an American citizen because he had served in World War I. He and his family created a display in their window saying their restaurant was an American business,” she added. ”The American Legion supported my great-uncle, since he was a veteran, and held their meetings at The Classic Grill.’’

Econome believes the immigrant experience of past generations should not be forgotten.

“Some of the struggles my family faced are now faced by immigrants from other places,” the author said.

“I wanted to give an authentic presentation of what Greek American families experienced when they immigrated,” Econome said. “I hope my story reflects some of their strength.”

You can reach Staff Writer Dan Taylor at dan.taylor@pressdemocrat.com. On Twitter @danarts.

…and receive the recipe for George’s Phyllo-Wrapped Chicken as mentioned in this novel.